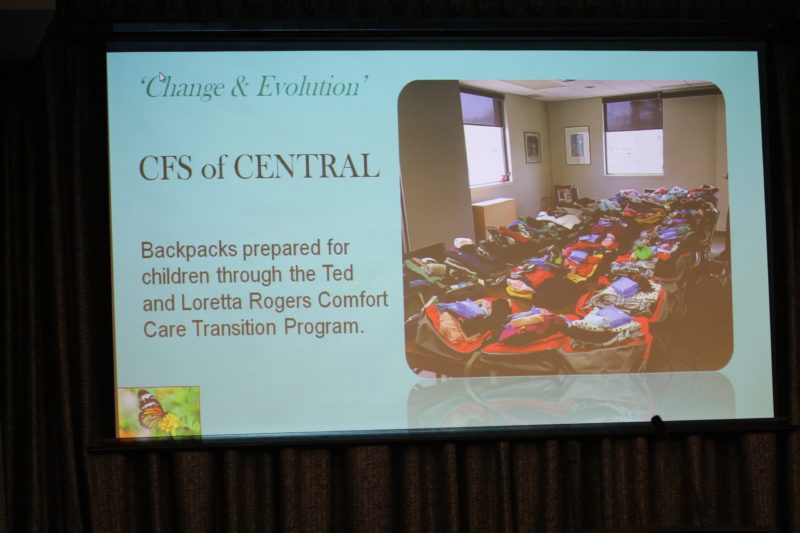 CEO Debbie Besant outlined numerous changes that have taken place over the past several years, including the way that the General Authority and its agencies do their work.

“At the General Authority, the majority of our work is with families. It is not so much with children in care, which we see as a very positive evolution and change,” she said.

Besant added, “We have really focused on supporting families. Our key mission is to support families in the context of having their children be safe and healthy at home.”

She noted that in the 2018-19 annual report, the General Authority’s days care and child in care numbers have gone down.

“We have an increase in family service files, so that’s a good thing. So we are doing our utmost best to support families and their children in their own homes.”

In her remarks to those gathered at the Norwood Hotel Sept. 25, Besant also spoke about Bill-C92, An Act respecting First Nations, Inuit and Métis children, youth and families, which will come into force on Jan. 1, 2020. Bill C-92 provides jurisdiction for Indigenous governing bodies — First Nation, Inuit and Métis — to pass laws governing their own child welfare systems. Besant said the bill is an exciting move forward but one that brings some trepidation about the implementation process.

Part of the AGM featured a tribute to the work of General Authority agencies and service regions.

Besant applauded the efforts of the Bill C-92 working group—made up of representatives from the four authorities, the Department of Families Child and Youth Services division and representation from Indigenous Services Canada.

Once implemented, Besant said the bill “may change some of our practice, but we are used to that. And I think that it is good that we evolve as time goes on.”

She also praised the work done on child welfare legislative reform recommendations conducted by working groups comprised of representatives from the GA and its agencies.

“Thank you to our agencies and the agencies of other authorities who have participated in making presentations to the Legislative Reform Committee.”

Another major change, Besant noted, has been the introduction of Single-Envelope Funding, which is an approach that gives CFS authorities flexibility to direct funding towards the best interests of children, youth and families.

Under Single-Envelope Funding, agencies and authorities are provided one lump sum for child maintenance, salary and operating funding.

What that has meant, said Besant, is “we were able to redirect money to work with families to do more preventative work to keep kids safe at home, which is our key goal.”

Moving forward, Single-Envelope funding will continue to evolve, she said, and there is more work being done on policy, procedure and rules—all with the collaboration of the directors of GA agencies, who are supported by their boards.

Besant also spoke about other major transformations occurring in child welfare, including the evolution of the practice model.

“I think one of the big changes that’s happened at the General Authority in the five years I have been there is that this is not the GA’s practice model. It is our agencies’ practice model. They own it.”

“And in partnership with that, we utilize Caring Dads, which is a treatment group program for dads who are at risk for abuse of their children or partner.” This move will help the Authority and its agencies do more work with engaging with fathers in the families that they work with, Besant said.

Attendees were shown a video produced by CFS of Western on the way Safe & Together has changed front-line work in that the victim of domestic violence is supported for her/his efforts to keep children safe.

“We could not provide care for our children without Marymound, Knowles, New Directions, McDonald Youth Services, B&L and others. These relationships are evolving.

“We are always looking to match the right service for the right child at the right time. That is so important.”

She also acknowledged the attendance of representatives from the GA’s agencies and boards as well as from the Manitoba Children’s Advocate and the Manitoba Ombudsman.